What the Reservoir Dogs Brewery lacks in name creativity, they sure make up for in the quality of their brews. 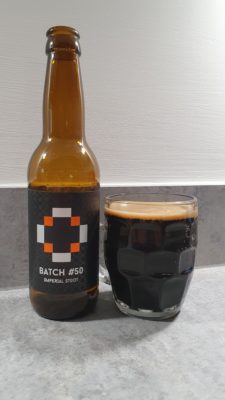 All the way from Slovenia, this 9.5% stout is simply the 50th batch they made. When the beer's that good though you don't need to think too hard about the name - this is definitely a stout I wouldn't hesitate to buy again if I saw it in a shop.

As soon as you pop the cap you get chocolate and sweetness, a heady concoction that puts you more in mind of a milkshake rather than a strong stout, which is no bad thing.

The pour is a beautiful dark, dark brown and it's very smooth - so smooth I struggled to get any head on the beer. The chocolate aroma sticks around for the duration but on the taste it's more of a slightly bitter coffee flavour; at least before the alcohol kicks in.

Make no bones about it, this is a strong beer. Although apparent in the flavour, it's excellently balanced with the 8 different types of malt which make it taste half as strong as it actually is.

You're left with a silky aftertaste that carries the chocolate right through, a hint of bitter-sweetness like dark chocolate and the slight afterburn from the booze the only evidence it was there at all.

Like the name, the effort with the bottle design is clearly minimal. But again, the beer does the talking here, so they don't need to make something crazily eye-catching. 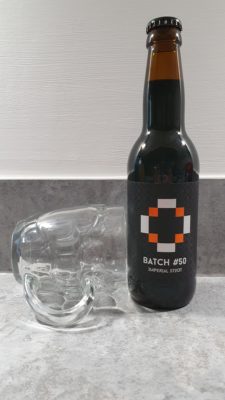 What I love about this bottle is the repeated black-on-black logo in the background - that's also embossed. Puts me in mind of my Grandma's living room wallpaper, which is strangely comforting.

Not one to win awards, but certainly one i'll always look out for.

Where Can I Buy Batch #50 Imperial Stout?

You can get it online at Beer52 which is great because all the other results for it are for whiskey. Although I like a strong beer, I don't think whiskey-strong would be as good.

It's £4.29 which is quite pricey for a 330ml bottle, but considering it's strength and it's place of origin it's an absolute bargain.