Yakima Pilsner
WE RATE IT:  / 5
A classic pilsner with a trans-Atlantic twist, this fruity morsel is brewed with Yakima hops from the USA to add another dimension to what is a crowd favourite.
Brewed in Hebden Bridge, UK by Vocation Brewery
brewery website
12/07/2020

A classic pilsner with a trans-Atlantic twist, this fruity morsel is brewed with Yakima hops from the USA to add another dimension to what is a crowd favourite. 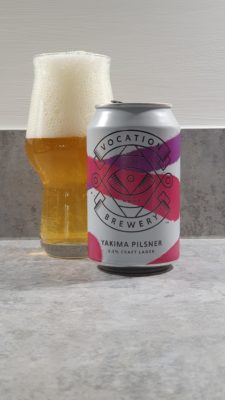 That's about the only frill there is to it though, but that's not to say it makes it a poor brew. Quite the contrary, the Yakima hops is a welcome variation on pilsner, which is quite common.

The aroma is quite fruity but that's not something that follows through to the taste. Quite the opposite, in fact, with the initial flavour being largely bitter.

This bitterness evolves into a tasty fruitiness - not unlike a really dark marmalade - that comes back to the fruity and subtly sweet flavour in the aftertaste.

It's delicately hopped and very well balanced between being too hoppy and too bitter which, in combination with its aesthetically pleasing light golden colour make it a very interesting and delicious beer.

Big and bold, the can looks like something that would appear on the cover of a David Bowie album with the colourful slash across the white can. 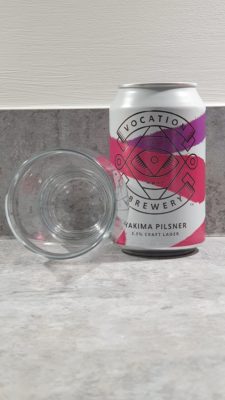 The wording takes a more traditional angle with a shield-and-banner design, but the eye-style design right in the centre gives it an almost illuminati-esque vibe.

If you want to taste this slightly-innovative pilsner for yourself you don't need to travel all the way to the Yakima Valley, you can simply go to Beer Hawk and pick up a pack of 24. Or Tesco's, it'll be in their beer aisle too.