Aldstadt
WE RATE IT: 4.25 / 5
A stunning deep amber colour in the pour coupled with a heady aroma associated with the lager-beers of Germany sets out the stall for Altstadt, which is backed up by the
Brewed in Munlochy, Scotland by Black Isle Brewery
brewery websitebuy now // £2.49
14/06/2020

Sehr gut is the best way to describe this gorgeous beer, which although brewed in Scotland would be perfectly at home in the beer halls of Munich - although ideally in a 1L stein rather than a 330ml can. That's probably because it is brewed by a German who knows a thing or two about beer: Thorsten, the Head Brewer at Black Isle.

Making the most of the notorious Highland winter months to allow time for a slow brew to do its thing has resulted in a beer that is as delicious as it is German - ie very.

A stunning deep amber colour in the pour coupled with a heady aroma associated with the lager-beers of Germany sets out the stall for Altstadt, which is backed up by the full, quite malty taste which gives the beer a lot of body.

Despite this depth of flavour and volume, the beer has a very crisp finish and an aftertaste that, although slightly sweet, balances the beer nicely.

The cleanliness you would expect from a lager, but the depth and flavour is as surprising as it is welcome. At 4.8% ABV It lacks some of the heaviness that red ales can bring and the crisp finish means it's very much a session beer, although if you were to have it in steins you may not make it very far into the session.

A simple design but one that's super-effective at standing out with the large, Black Isle logo in the centre. The Scottish thistle is a great foil for standing out on busy shelves, and the blue and white background that's ever so slightly reminiscent of your Grandma's wallpaper works really well. 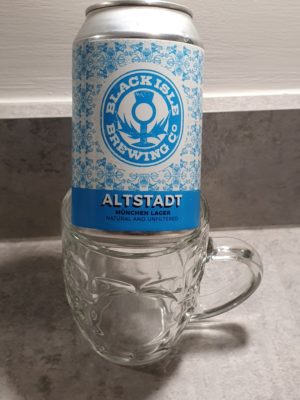 The bold blue wrap around the bottom has a similar effect and the name makes it quickly obvious this beer is grounded in something German. Just like the beer, it's a real winner.

You can get this Scottish special online at Beer52 for just £2.49.