Dennis Hopp'r Review
WE RATE IT:  / 5
It is unclear whether the beer is named after Dennis Hopper, or if it relates to him as a character. If anyone knows whether Dennis Hopper is dry and fruity, let us know.
Brewed in London, UK by Mondo Brewing Company
brewery websitebuy now // £2.39
15/06/2020

If dry, hoppy beers are your thing then this is perfect, a beer so dry it's a wonder there's anything but dust in the bottle when you open it.

I'm going to be honest right off the bat - beers that are too hoppy aren't my thing, same with dryness. It's why I've never really got on with champagne/brut beers. 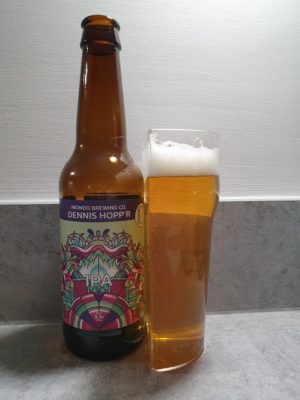 That aside though, this is a nice beer. Chilled, it's very morish and it is very easy to imagine yourself sat somewhere sunny drinking it.

It is unclear whether the beer is named after the actor Dennis Hopper, or if it bears resemblance to him as a character. If anyone knows whether Dennis Hopper is dry and fruity, please let us know.

On the nose, the aromas are very citrusy which masks the hoppiness well. It pours a lovely golden colour with a pure white head that would make it easy to mistake for a lager if it weren't for the lack of carbonation.

The taste is initially fruity with the citrus flavours definitely present, combined with a subtle sweetness that is very refreshing.

The hops add in a little bitterness which helps to balance it, but then it goes too far the other way in my opinion and leaves an aftertaste that, although having a hint of lemony sweetness, is just...dry. The same kind of dryness that a pinot grigio would leave.

I don't really know what's going on but I like it. Groovy is probably the best word to describe it. 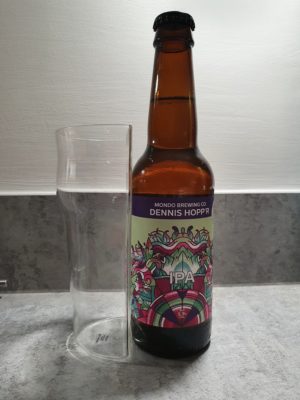 It looks like it could be an homage to the humble hop, with some definitely hoppish shapes in there if you look close enough. It's a great design and is certainly intriguing - if you saw it on a shelf you'd want to take a closer look.

If Dennis Hopp'r sounds like your kind of drop, then you can pick up a bottle or 5 for just £2.39 at Beer Hawk.