A roasty, nutty, naughty little number that's full of flavour from start to finish. A true treat for the senses, if a little complex.

Ninkasi Noire takes its inspiration from a traditional Lyonnaise dark beer from the 1800s, which is a nod to Ninkasi's heritage and where they are based. Lyon itself has become somewhat of a craft beer hub within France and Ninkasi is one brewery to start to make a name for itself internationally, picking up awards for France's best porter in 2016 and in 2017 a World Beer Award for the best beer in France. 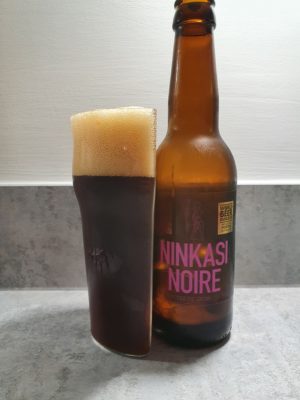 There's a lot going on in this beer with a deep ruby and chestnut flavour combined with chocolate and coffee notes, all mixed up to create a roasty and almost sweet aroma.

Almost immediately you get the chestnut coming through, with a hint of brown sugar that just takes the edge off what bitterness may remain from the coffee.

The coffee itself is more of a roasty hint rather than a full-on coffee flavour, but the aftertaste is where this beer really hits the straps, in my opinion.

With so much going on in the nose and mouth when you drink it, it takes until a few moments after to really appreciate the quality of this beer. Indeed it's such a busy brew that each time you take another sip another flavour or depth reveals itself.

The delicate sweetness that combines with the malts to create a subtle chocolatey flavour; the deep and rich nutty flavour that flirts with being a little fruity and works well to balance the beer.

Standing out with the neon pink lettering against the dark brown bottle, the unmistakable outline of a dancing lady lending a touch of naughtiness to the design.

Of course, the lady of lines is Ninkasi's logo so it features on every bottle. But not every bottle combines an almost black background with neon pink lettering that wouldn't look out of place on the Quartier Pigalle, but is perfectly at home on the supermarket shelves.

You can buy Ninkasi Noire and experience this complex delight for yourself from Beer52 for just £2.99, which is at least half of its true value I reckon.