ZO
WE RATE IT: 3.5 / 5
Lots of new world hops from America give it quite a grassy, piney aroma which is laced with hints of fruitiness. As far as IPAs go it's good, but WHAT IS ON THE CAN!?
Brewed in Bad Radkersburg, Austria by Bevog Brauhaus
brewery website
09/08/2020

Zo, probably the most unique name for a beer I've ever come across. Not that the simplicity of the name is reflective of the beer, but as far as punchy, memorable names go; it's a strong contender.

The real intrigue with this one is actually the can. After several discussions, I still don't know what it is. Is it a swamp monster? A dinosaur? Some kind of bastard-Nessie? An Austrian beast from folklore? 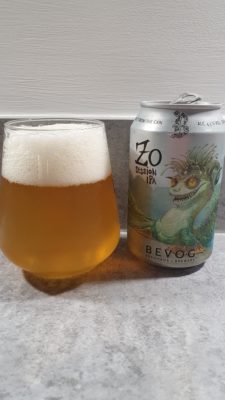 As far as session IPAs go it's pretty good too, but WHAT IS ON THE CAN?!

Lots of new world hops from America give it quite a grassy, piney aroma which is laced with hints of fruitiness, although this isn't as obvious as some similar beers that use these kinds of hops.

The bitterness that's present in so many hoppy IPAs is there, but is well balanced by a malty taste which is prominent in the aftertaste, but still evident in the mouth.

This balance in flavour makes it a very fine beer to drink and although it's not one to knock your socks off, you could reliably drink a few of them and not tire of the flavour.

Now, the real question about this beer can be addressed. What on EARTH is on the can?

It's definitely some kind of beast, judging by the fins and the long body it's probably aquatic or semi-aquatic. Is this Zo? Is Zo the place where it lives? 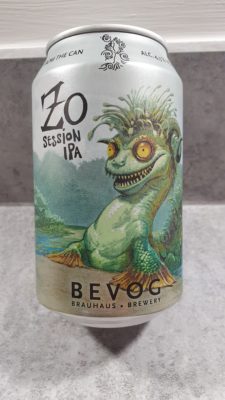 Ultimately, not knowing is part of the mystery. It's a monster, in a swampy environment. What I know for sure is that i'll be keeping an eye out for this one regardless.

Where To Buy ZO Session IPA?

Zo is difficult to pick up. It's not even available on Amazon which is how tricky it is to get hold of. It's listed on sites like Beer52, but you'll have to wait for it to come back in stock.