Swerve Driver
WE RATE IT:  / 5
First off, I don't condone drink driving. Driving has little to nothing to do with this brew once you get past the name.
Brewed in Knaresborough, UK by Turning Point
brewery website
08/08/2020

First off, I don't condone drink driving. Driving has little to nothing to do with this brew once you get past the name.

Having said that, I would definitely make a swerve if I had the chance to grab hold of this beer again. 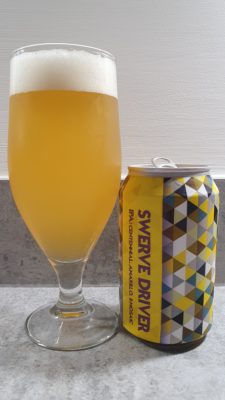 Described by Turning Point as 'monstrously dry-hopped' with the triple threat of hops: Centennial, Amarillo and Mosaic. That's where the monstrosity ends though, if anything it's the opposite of monstrous, whatever that is.

On the nose it's actually quite light and creamy, with delicate hints of citrus and other tropical kinds of fruit that are enough to make it a very attractive smelling beer.

Being dry-hopped the beer carries a lot of bitterness through, but the subtle tastes of fruit makes balances it our nicely and means that the bitterness is never strong enough to turn you off.

The mix of hops makes the entire tasting experience quite fragrant, something which makes it very difficult not to just...keep drinking it.

I mean, it's gorgeous isn't it? I'm sure there's a fancy name for the triangle pattern on the side but i'm not artsy enough to know what it is.

What I do know though is that it reminds me of some of the walls inside the 90s bars I visited in my clubbing days. 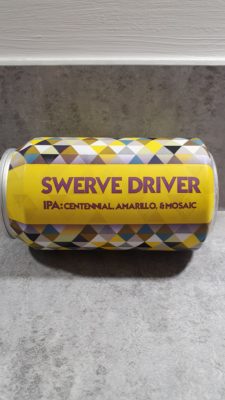 The bold yellow stripe with the purple writing down the side add to the allure and broadcast that this beer is all about the tripe whammy of hops involved.

Where To Buy Swerve Driver IPA?

You're going to have to go to Turning Point Brew Co themselves to order this one, but it's very much worth the effort.

And if it transpires that they only have it in crates then, well, every cloud eh?