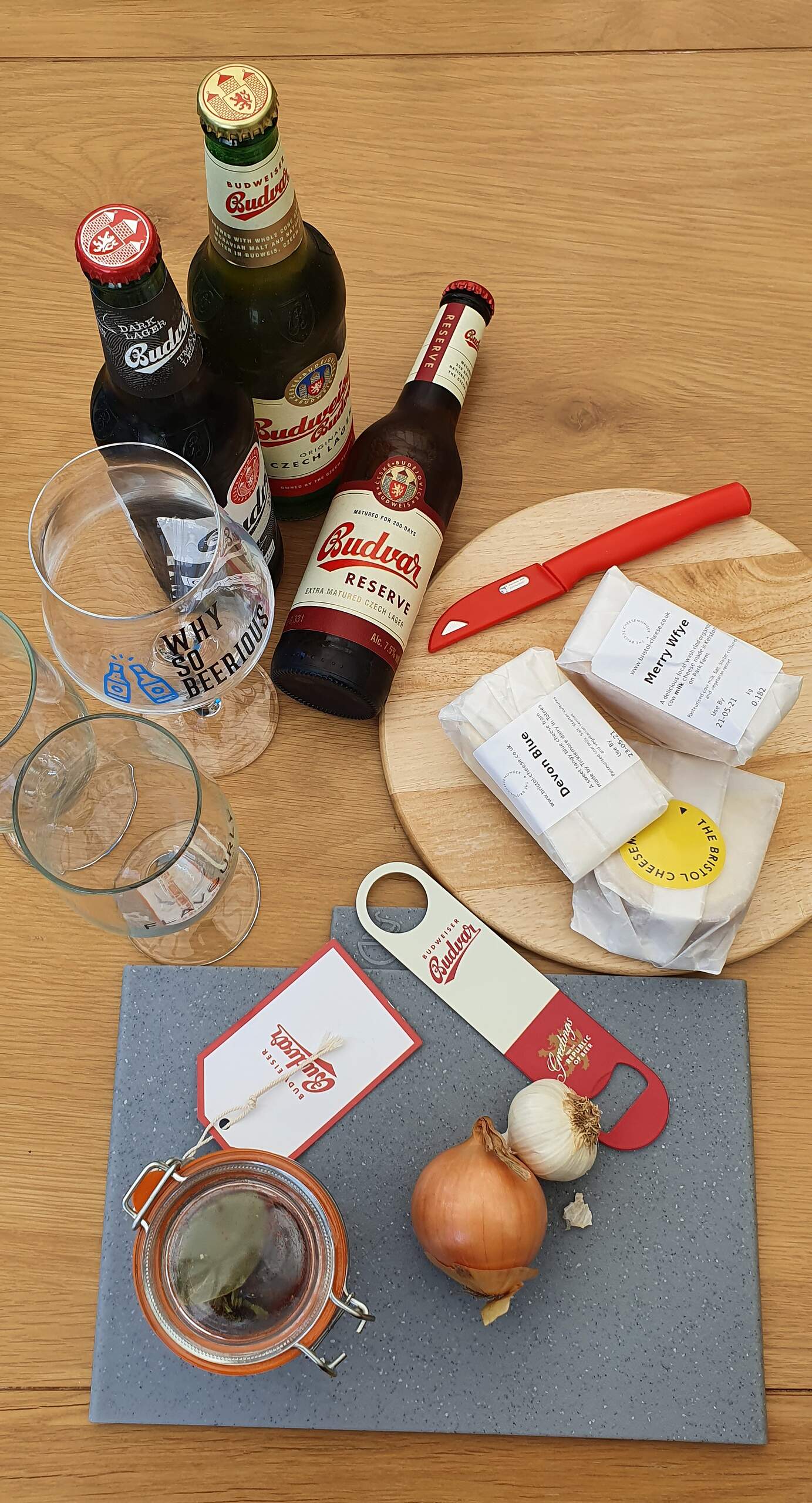 When Budvar invited us to a beer tasting and cheese pairing session with their new brand ambassador, we jumped at the chance. We were well up for the beer, but beer and cheese?

Not so much. But we'll try anything once. Beer-related, that is.

Cheese is more commonly paired with wines, as is most food. We don't know why wine is the default alcohol type to pair with food: is it a sophistication thing? A form of classism? Or is it just that, typically, when beer meets food it's from a dodgy kebab van outside a bar, nightclub or football stadium.

After sitting down with a table full of beer and cheese, we logged in to Zoom to be met by a beaming Radim Zvanovec: Budvar's new brand ambassador.

Young, chatty and clearly passionate about beer and brewing, Radim comes from a background of bar work around Czechia and Europe and wants to bring this passion to his work at Budvar. A homebrewer himself which clearly gives him an appreciation of quality ingredients and brewing, an appreciation that comes across in the way he talks.

He talked in detail about the origins of the original Budvar lager, from it's inception in 1895 to modern day and their terse, length legal battle with macro-brewery Anheuser-Busch InBev. The way they make beer has changed little in all these centuries, and the ingredients and process used to brew it is partly why it is such a popular beer around the world and not only Europe.

History lesson over - and we mean this in the most complimentary way - it was time to crack open a beer or three. First up was the Budvar Original which pours a delightful golden colour with a crisp, white head typical of lager.

With a malty flavour so typical of pilsner-style lagers from Europe, there also comes something a little spicier. There's a touch of floral spice that goes well with the doughy kind of flavour that helps give it some body. For the in-depth review click the link below.

Next up was something really very special, Budvar Reserve. Aged for 200 days in barrels underneath the brewery, giving it a deeper amber colour which has a lot more legs on the glass than the original.

Stronger than Original at 7.5%, this 2.5% difference really does give it something else. As well as a stickier texture, it also provides a honey sweetness that gives an extra dimension and smoothness to the lager. Click our review below to read more.

Finally was the Budvar Dark, a lager that goes through the same lagering process as the other beers produced by Budvar, but with the use of caramel malt to create the dark, rich and nutty flavour.

Budvar Dark is a wonderful cacophony of nuts, roast and smoky flavours all mingling together in a way that provides something different on each sip. It's lighter than you'd expect for a dark beer, but that gives it an edge that is hard to beat. Read our full review below.

Now the bit that we were most excited about: getting to see how beer performed in the cheese-arena. This being a beer blog, cheese is definitely not our area of expertise. Enthusiasm, absolutely. Expertise, no. However, we will do our best to do these fantastic cheeses justice.

The cheese provided by the Bristol Cheesemonger included Merry Wyfe, a local wash rind organic cow milk cheese made on Kelston Park Farm in Bath. This one is washed regularly in Somerset cider to give the rind a real crunch to go with the mellow cheese.

There was also Rachel Goats, a semi-washed rind goats cheese from Somerset and a Devon Blue, a tangy and fruity blue cheese made in Totnes.

The crusty rind of the cheese cuts through the smoothness of the lager fantastically, providing a savoury crunch to the texture that contrasts the smooth cheese inside, but compliments it too.

The beer is malty and the carbonation on it really does work wonders on the clarty nature of cheese to coat your mouth. The fizz of the lager and the malty, subtly sweet tastes merge with the savoury, creamy cheese to create a real winning combination.

Reserve having a higher ABV, a stronger cheese was required. But not too strong so as to overpower the flavour of the beer and hog the limelight. Enter Rachel Goats cheese, a goats cheese that has that typical savoury flavour of goats cheese with a rind that helps provide texture to the beer taste.

Goats cheese and honey have long been paired together in food, but never in this way as far as we know and the strong but sweet flavour of the beer combines with the strong but savoury flavour of the cheese to make it a real mouthful. With all the flavours involved it would be easy for some of them to get lost, but the beer and cheese balance each other perfectly.

Big flavours collide when Budvar Dark met Devon Blue. The bold flavours of the beer required something equally heavy-hitting to cut through, and the Devon Blue cheese stood up to the test fantastically.

The subtle sweetness and nutty flavours of the beer cut right through the strong, bitter flavours of the cheese but didn't cancel them out and allowed both flavours to share the job of tantalising the taste buds.

Or marinated cheese, for those who can't speak Czech. As well as providing the beer and cheese, Budvar also provided a recipe jar for a Czech pub-snack classic for us to make with Radim.

Made using the cheese provided, along with the spice mix that included chili, various herbs and an addition of a clove of garlic. It involves cubing the cheese - or what was left of it - into small chunks and adding in the chopped garlic; then filling the jar with olive oil to cover all the ingredients. . After waiting for 2 weeks - 5 days room temperature and a week in the fridge, it was ready to open.

All of these cheese retained it's natural flavour but with an extra zing to them, a greasy yet delicious flavour to compliment the already lovely cheese which makes it easy to see why this kind of snack would be so popular in a pub.

As we've never really considered pairing beer and cheese before it's not something we've come across often, but after tasting these cheeses with these beers we're completely willing to just do whatever Radim says when it comes to cheese, or beer for that matter.