Undefeated Champion
WE RATE IT: 3.25 / 5
I’m not sure who this beer beat (to the death, we can only assume) to claim such a name, but they must have been good because this one’s an absolute corker.
Brewed in Collaboration by Fierce Beer, New Zealand Beer Collective
brewery websitebuy now // £2.77
30/09/2020

Calling a beer an undefeated champion is a bold claim to make, especially when the craft beer scene is less heavyweight boxing match, but more royal rumble.

I’m not sure who this beer beat (to the death, we can only assume) to claim such a name, but they must have been good because this one’s an absolute corker. 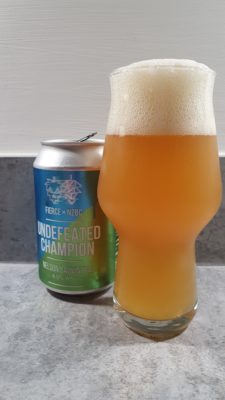 Brewed in collaboration between Fierce Brewing and the New Zealand Beer Collective (NZBC), Undefeated Champion is a celebration of New Zealand’s trademark hop: Nelson Sauvin, which is revered for its fruity flavours and tropical notes.

This isn’t the first time we’ve encountered Fierce Brewing on the blog. I was less than impressed with their collaboration with 8 Wired - Fancy Wiring - so I was thrilled that this was such a winner.

The nelson sauvin really shines in this one, from the tropical aromas that are reminiscent of fruity cocktails to the slightly tangy and bitter aftertaste.

Undefeated Champion has character in spades, with a whole range of fruitiness on the tongue and in the aftertaste and a pretty solid body. There’s a delicate bitterness throughout which adds balance to the sweet, tart fruit flavours.

The beer pours like a squeezed mango, with a rich orange colour that’s wonderfully carbonated to make it incredibly refreshing.

It looks like a head to head. Almost like it should be two beers, with the contrasting colours working against each other diagonally across the can. 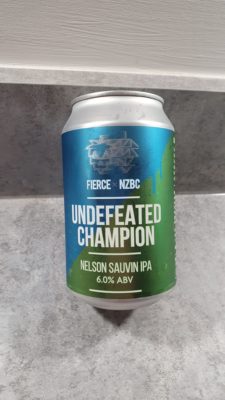 The two brewery logos blending against each other in white with the bold, white name stamped across the front makes it stand out, despite being quite a simple design.

Being a collaboration with an antipodean brewery, there aren’t many of these knocking around. You can get added to the waitlist on Honest Brew though if you’re a member, where you will pay just £2.77 for the 330ml can.

Cheaper than ringside seats at the MGM by a long shot.