Suitsu Porter
WE RATE IT: 4.5 / 5
'Suitsu' is Estonian for 'smoke', something which I discovered after sipping this one. It's possibly the most perfect name for a porter I have ever come across.
Brewed in Harju Maakond, Estonia by Õllenaut
brewery websitebuy now // £2.49
14/07/2020

'Suitsu' is Estonian for 'smoke', something which I discovered after sipping this one. It's possibly the most perfect name for a porter I have ever come across.

Sadly I don't speak Estonian, so it was difficult to determine what this beer was about other than the smokiness. The picture of the roast ham on the side of the bottle made me think roasting and meaty flavours could have something to do with it, but it could just as easily have been a joke to trick poor monoglots like myself. 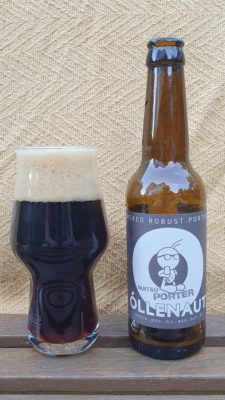 The folks at Õllenaut have really outdone themselves with another fantastic beer, something which is unsurprising as they emerge as forerunners in the Estonian craft beer scene. They strongly believe that each beer they brew should be stuffed with local character and flavour.

if that's the case with this one then it must have been brewed next to a chimney.

Unsurprisingly, smokiness runs all the way through this. From the moment the cap comes off it's like you've lit a fire in your kitchen. Smokiness abounds.

Even during the pour, revealing its deep black colour topped with a light tan head, you still get a lot of smoke. It's like the beer itself is on fire.

Surprisingly, the taste isn't too smoky. It's definitely still there but it's certainly more subtle than the aroma would lead you to believe. Instead, it's replaced with a rich depth of flavour that is similar to the burning alcohol sensation you get with strong beers, without the actual burning.

Afterwards you're left with just a fraction of the smokiness that was present at the start, along with a slightly savoury taste - which I presume is where the ham comes in.

The guy with the quiffed hair and glasses (is he called Õllenaut? Mr Naut? Õlle? Who knows!) stands trenchant, clutching his glass and staring somewhere to your right. 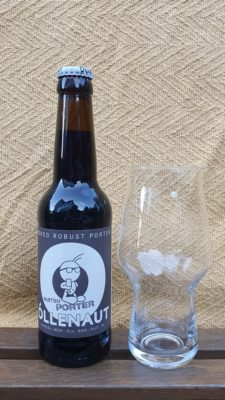 I don't know what he's looking at, but he's on every bottle design Õllenaut put together so I assume he's important somehow. This is one of the tamer Õllenaut bottle labels, with the fella on a simple background of a white 'O' against dark grey.

It's a simple design, but one which doesn't need to be too elaborate given the contents.

If your smoke alarms are fitted and working then you can pick up some Suitsu Porter from Beer52. Fire extinguisher not included.