Subtropic
WE RATE IT: 4.25 / 5
Drinking a beer called Subtropic in Britain is optimistic, but FourPure have done it again in creating a morish pale that can brighten up even the rainiest days.
Brewed in London, UK by Four Pure
brewery websitebuy now // £2.99
04/09/2020

Drinking a beer called Subtropic in Britain is nothing if not optimistic, but FourPure have done it again in creating a deliciously morish pale that can brighten up even the gloomiest of British summers. 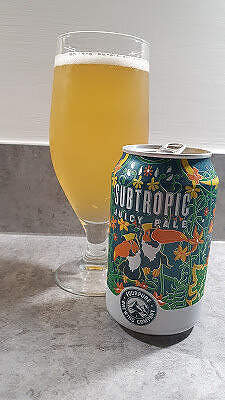 It's packed with tropical flavours and even the can looks like it's taken directly from a Hawaiian print shirt, which just adds to it's appeal to be honest.

As you'd expect, the aroma is immediately fruity and it pours like a grapefruit juice would, although that could just be clever aesthetics playing tricks on the eyes.

It's crisp and initially quite dry in flavour, but the dryness is soon replaced by a sharp, juicyness brought by tropical fruits like grapefruit and pineapple.

The fruity wave soon subsides like the sickest wave to leave a slightly bitter taste but not one that's unpleasant; served chilled it's an absolute delight.

It's undeniably tropical. It's a jungle, with lots of leaves, vines and flowers popping out all around the can. 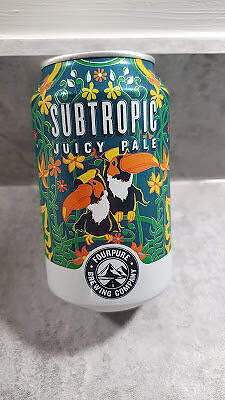 The pair of toucans helps add to the equatorial feel too, being a stereotypical neotropical bird.

The brewery logo and typeface with the beer name and style over the top of this tropical scene make it an excellent can design.

You can buy Subtropic from Beer52 when it eventually comes back in stock. Well worth a punt at just £2.99 to brighten up the autumnal weather.