Stiegl Gold
WE RATE IT:  / 5
Chilled, it’s absolutely delightful. A morish beer that deserves so much more than the small bottle it came in. It needs a stein, at least.
Brewed in Salzburg, Austria by Stieglbrauerei zu Salzburg
brewery websitebuy now // £2.39
22/09/2020

As well as having one of the most Germanic names I think i’ve ever heard, Stiegl Gold is also one of the nicest Austrian lagers i’ve ever had. 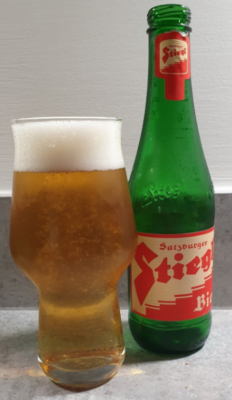 The superlatives continue, too, as the gloriously named Stieglbrauerei zu Salzburg is Austria’s largest private brewery and has been privately owned for more than 500 years, which is a long time so there’s no surprise they’ve honed their craft to an art form.

Stiegl Gold is not an innovative beer. It’s made using traditional ingredients to a traditional recipe - one that’s likely hundreds of years old. But my, what it lacks in innovation it makes up for in style and quality.

A testament to the phrase ‘do the little things well’, Stiegl Gold nails it. An Austrian lager with a malty taste that has a touch of bitterness, but body to go with it. It’s well carbonated but not excessively so, allowing the flavour of the malt and slight bitterness of the hops to shine through in every taste.

Chilled, it’s absolutely delightful. A morish beer that deserves so much more than the small bottle it came in. It needs a stein, at least.

I love a green bottle. There’s something just so authentic about green bottled beer. Like it comes from a different age before cans with cartoons on and craft IPAs were even thought of.

This green bottle is Stieglbrauerei zu Salzburg’s own creation, with ‘Stiegl’ embossed into the glasswork. The label is simple, but effective with a fraktur-style font which harks back to the medieval time when it was probably first brewed. 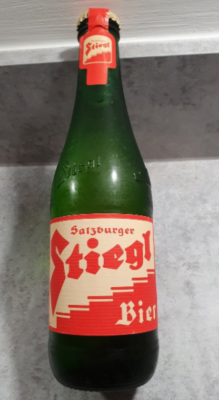 It’s eye-catching with the bold red type standing out against the cream background, but understated too in that the label doesn’t wrap the entire bottle. The paper-sealed bottlecap with the beer name and colour scheme is a lovely touch too. Pure class.

If you don’t want to support a 500 year old brewery by buying it from the Stieglbrauerei zu Salzburg website (it’s been around this long, i’m sure it’ll be fine), then you can buy it from Beer Hawk for just £2.39 per bottle.