Pot Kettle Black
WE RATE IT: 3.25 / 5
Billed by Yeastie Boys as a 'juxtaposition of beer styles', it's certainly unusual and not your regular porter.
Brewed in Berkshire, UK (UK Partner Brewery) by Yeastie Boys
brewery websitebuy now // £2.50
03/07/2020

Taking its name from a popular idiom, Pot Kettle Black is a rich, dark porter that manages to be quite fresh despite its depth of flavour.

Billed by Yeastie Boys as a 'juxtaposition of beer styles', it's certainly unusual and not your regular porter. 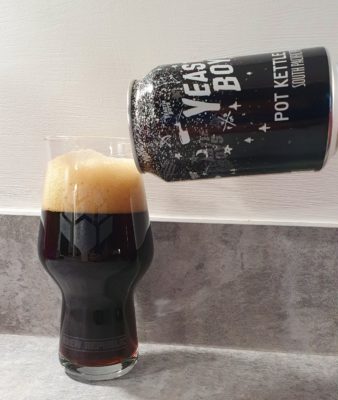 Despite being a creation by Yeastie Boys in New Zealand, the Pot Kettle Black I had was brewed by West Berkshire Brewery in collaboration with Yeastie Boys as their' UK partner'.

It's quite unusual for a porter to be so highly hopped which isn't entirely unpleasant, but it's got quite a bitter scent on the nose which is strong enough to stop anything else coming through.

It pours a beautiful treacle-black and once out of the can, you get a subtle sweetness in the aroma. First sips are heavy with bitterness that is quite metallic, again cancelling out much of anything else that would come through.

The aftertaste is a delicate dark chocolate touch, but the powerful bitter flavour is just too much to let anything else in. Despite all this, it's a pleasant enough porter and one that i'd certainly try again; but only if I was feeling in a mood for something bitter.

As you'd expect, it's black. 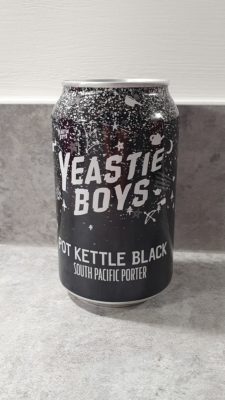 The top half of the can is a mix of what I would call paint-splatter-cum-constellation, with white designs of pans, pots and kettles mingled in with starry images like bows, moons and constellation lines between dots.

It's magnificent, a can that you can look at and see a new shape each time.

You can try this one for yourself if you're an Honest Brew member for just £2.50, otherwise you'll have to pay £2.59 for it. It's well worth a go for that price.