Peach State
WE RATE IT:  / 5
A peach sour puts you in mind of long, hot summer days of graft; that first refreshing taste of a fruity but tart brew being welcome relief at the end of the day.
Brewed in London, UK by Four Pure
brewery websitebuy now // £2.00
18/07/2020

A peach sour puts you in mind of long, hot summer days of graft; that first refreshing taste of a fruity but tart brew being welcome relief at the end of the day.

And that's pretty much exactly what it is, although less of the hard graft part and more of the refreshing, welcome relief part. 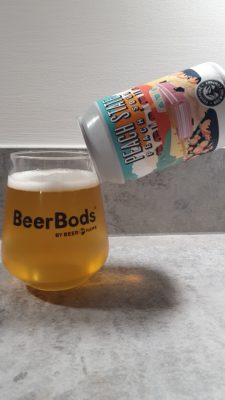 I don't have much experience with sours, but what I have had I have enjoyed and this is no different. The folks at FourPure call it a tribute to the state of Georgia in the US, the peach state, and they really go to town on it by adding more than 8 pounds of peaches to each barrel.

The aroma is immediately peachy but there's also a definite sense of tartness in the smell, it is a sour after all. The pour is a kind of muddy yellow colour and there's little head to speak of, but despite that there's plenty of carbonation.

The first sensation you get on sipping is the sourness, it's a lip-smackingly tart beer but it's very quickly balanced with the peach flavour that fights on your tongue to take over the flavour. It loses. The sourness almost overpowers all the peach in it and makes it almost dry, similar to a brut IPA or even a dry fruity cider.

Despite the amount of peach there is in it, the flavour is much more subtle than expected. Peach can be quite tart anyway and combined with the sourness makes it a little overpowering. I had it chilled which perhaps nulled the peachiness slightly, but that been said it was incredibly refreshing and one that I will certainly look out for.

Being a tribute to Georgia, the United States' main source of peaches and something the state is famous for, it's only fitting that the can features a pick up truck full of peaches in the foreground, with loads of barns and windmills from what I presume are typical of peach farms in the background. 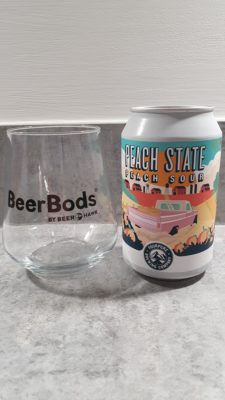 There's a big sun in the sky (or is it a peach?) and rows of peaches in the ground on either side of the pick up truck, although i'm pretty sure peaches grow on trees.

It's a fantastic can design and one that definitely stands out, not least with the large, bold letters in the design.

You can buy this refreshing sour patch kid in your local Sainsbury's or via the FourPure website, making it a very accessible sour for the summery days.