Mosaic
WE RATE IT: 4.25 / 5
Mosaic's can vary in quality. On the one hand you have fine Roman frescoes spanning an Empire, yet on the other hand you have the tissue and card version toddlers create.
Brewed in Tampere, Finland by Pyynikin
brewery website
07/08/2020

Mosaic's can vary in quality. On the one hand you have the fine Roman frescoes and elaborate designs that spanned their Empire, yet on the other hand you have the tissue paper and card version your toddler brings home from nursery. 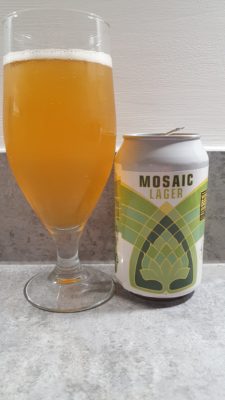 This is the former. As far as lagers go, it's up there with the Romans not slumming it with the kids.

Mosaic was a winner of the World Beer Awards in 2017, taking the title of World's Best Seasonal Lager - no small accolade in the craft beer age.

The mosaic hops that give the beer its name create a very pleasant, piney aroma that is immediately apparent from the pour and stays with you all the way through the taste and into the aftertaste.

The kind of flavour that you need to have in a lager to keep enticing you back for more, verging on dangerously morish if consumed on a hot day.

The flavour is balanced with a citrusy tang which adds a slight bitterness to the flavour but works very well, the subtle fruitiness and grassiness fighting it out on your tongue to decide which will be the most refreshing.

I had a bit of a headstart with this one after I reviewed Pyynikin's Cloudberry Saison, so i'm guessing that the design on the front is a hop. Specifically, the mosaic variety.

I know right, check out Sherlock over here. 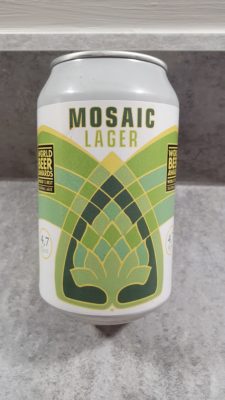 The can design itself is simple but effective, using green this time rather than the orange of the Cloudberry ties in nicely with the flavours of the hop, the triangular shape reminiscent of a stained glass window and making it very eye-catching.

Where To Buy Mosaic Lager?

Like it's sibling, Mosaic is a Beer52 purchase which means it's easier to go directly to them.

Alternatively, though you can always visit the Pyynikin site.