Lush
WE RATE IT: 4 / 5
Used in parts of England to show your appreciation to something, ‘lush’ is a word that has made it’s way back into the language in recent generations.
Brewed in Manchester, England by Shindigger Brewing Co
brewery websitebuy now // £3.60
13/11/2020

Used in parts of England to show your appreciation to something, ‘lush’ is a word that has made it’s way back into the language in recent generations.

It also means full of life, like a lush forest. Happily, in this instance, LUSH is both of these things. On the can and in the beer it’s packed with what can be perfectly described as lushness.

There’s a lot of tropical stuff going on in this right from the moment you pop the cap of the can, with tropical smells filling your nostrils.

The initial taste is quite bitter and hoppy, but this quickly mellows into a tropical tartness that plays around with being sweet without quite getting there.

It reminds me of grapefruit, with the fruity bitterness that’s undoubtedly tropical and refreshing, but not as sweet as a pineapple or mango.

Into the aftertaste, LUSH has a dry finish that leaves you just parched enough to come back for another sip. Again and again.

It’s a lush can, in both senses of the word. Featuring a giant ‘LUSH’ that wraps itself around the can - impressive in itself for a four-letter word - that’s being taken over by a forest. 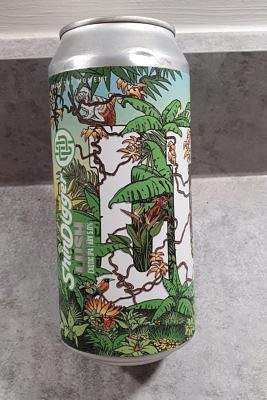 There’s jungle animals and creatures abound too which make it more like a Where’s Wally than a beer can, but the more you look at it the more you see.

You can get your hands on this lexical liquor from Honest Brew for £3.60 for members (£3.89 for non--members).