Elderflower Session Sour
WE RATE IT:  / 5
Elderflower is delicate. It’s mostly used to flavour cordials or soft drinks and is fragrant, floral and delicately sweet. But Vault City have made it delightfully sour.
Brewed in Edinburgh, Scotland by Vault City
brewery websitebuy now // £3.25
01/10/2020

Elderflower is a delicate flavour. It’s mostly used to flavour cordials or soft drinks and is very fragrant, very floral and delicately sweet.

But Vault City have made it sour. Delightfully so. Their Elderflower Session Sour is a homage to one of their first creations using a mixed-fermentation method, which they first did back in 2018. Since then they’ve become masters of the sour fruited beers, something which is no doubt due to their success with this one. 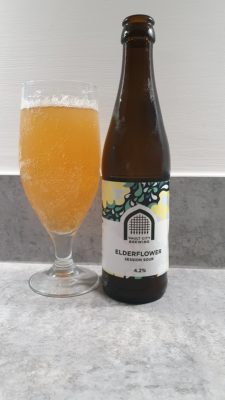 It’s not very complex with loads of bonkers ingredients or flavours, but on a hot day I can’t think of many beers i’d rather be drinking than this one.

For a flavour that can be so subtle, the aromas are immediately obvious as elderflower. It smells like a strong elderflower cordial although the pour is a deceptively dark shade of amber, not the super-pale colour normally associated with elderflower drinks.

The forward notes are the fragrant sweetness of the elderflower, but that quickly gives way to a crisp sharpness once the sourness comes to the fore. It’s dangerously tart but not in a bad way, with the aftertaste returning to the delicate sweet cordial-like flavour with just a hint of bitterness.

I had it chilled which made it all the more delicious, but I can see the bitter bite being lost if it was drunk at room temperature. Controversially, i’d be interested to try this one over ice. Especially in the garden on a scorching day.

The design of Vault City’s bottles are pretty standardised, with the white band around the front featuring the brewery logo and beer name/percentage pretty prominently. 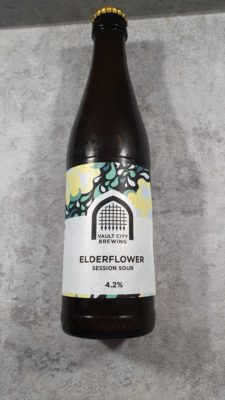 The variations are at the top of the label and the wrap, with this one being obviously floral, but more in the wallpaper zone than a wilderness one. Still, the yellows and greens do create an impression of elderflower, which is striking.

If you know where to look there are plenty of places to find this sour smasher, especially if you have a local bottle shop. We got ours from our local - Beer Central - but you can get it online from Premier Hop for £3.95 or Honest Brew at a pricier membership price of £4.62.