Cloudberry Saison
WE RATE IT: 4.5 / 5
If clouds produced fruit in the form of beer, it would almost definitely be this one. If it rained this instead of water, the country would be a much happier place.
Brewed in Tampere, Finland by Pyynikin
brewery website
07/08/2020

If clouds produced fruit in the form of beer, it would almost definitely be this one. If it rained this instead of water, the country would be a much happier place.

As it happens, cloudberries are a real thing and grow naturally in alpine, arctic and boreal forest; a landscape which in Finland is plentiful. 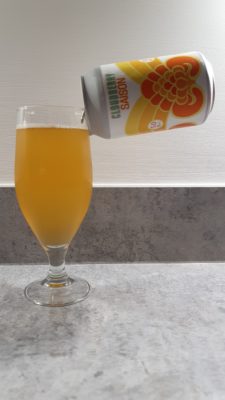 The berries of this mysterious nordic fruit are similar to blackberries except that they're bright orange, something that is mimicked in the can design which adds a lovely touch.

True to the history of saison ales this one is fruity on the nose but it's more the kind of depth of flavour that is similar to weissbier with banana style notes, rather than a sharp, citrusy flavour that comes with some pale ales.

The pour is a mucky orange and the aromas of the hops and fruit hit in the same way as weissbier, unsurprising given the two styles are from similar regions of Europe.

Slightly hoppy on the tongue with the delicious fruity notes that hit the back of your mouth make it a very refreshing drink, the carbonation is similar to a lager but then again that's what you would expect from saison.

The slight hoppy fizz balances out lovely with a touch of maltiness which comes through in the aftertaste. This was an unexpected but welcome addition that had no hint in the pour or taste and helps to maintain that balance.

The can design reminds me of an oriental design with the curves and symmetry, but it's clearly a homage to the cloudberry.

I say clearly, I had no idea what cloudberries were until I drank this and started to write this review, so before I just thought it was a kind of cool pattern. Knowing what I know now though it is obvious with the orange and yellow colour scales that this is a design built on the cloudberry.

WHERE TO BUY CLOUDBERRY SAISON

It was a Beer52 special which is sold out but, luckily for berry lovers, according to the Pyynikin site they're making some more.

Great news all round, I say.