Black
WE RATE IT: 4.5 / 5
Beer doesn’t need an imaginative name or a funky title to be a winner. Sometimes it just needs to be good, and if it’s really good then it doesn’t matter what you call it
Brewed in Swansea, Wales by Boss Brewing Co
brewery websitebuy now // £2.69
29/09/2020

Beer doesn’t need an imaginative name or a funky title to be a winner. Sometimes it just needs to be good, and if it’s really good then it doesn’t matter what you call it.

This is the case with Black, a rich and nutty flavour that’s silky smooth and decadent enough to let the liquid do the talking. 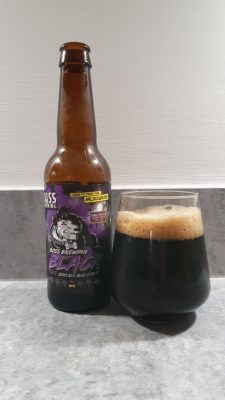 Black doesn’t just let the beer talk the talk though, they also walk the walk with the label design, which is clearly where a lot of the time went when Boss Brewing Co were planning the name and design of the beer.

The aroma is very rich and emanates nuttiness from the moment the cap’s popped, with more than a little smokiness to tantalise the senses.

Black calls itself a ‘seriously silky stout’, which is a great description of the pour and the body, with is both smooth and light despite being packed with flavour. I’ve had IPAs that were heavier than this, which is testament to Black’s quite low ABV for a stout - just 5%.

The flavour is nutty at first, but that develops into a subtle sweet bitterness which is like dark chocolate; it’s a flavour that’s very pleasant but quite odd in such a light brew.

Adorned with a nightmarish hell-beast called Fluffy, according to it’s collar tag, the bottle is striking in it’s colour combination of black and purple with yellow text boxes.

The label is plastered with all the awards Black has won, including regional, national and international accolades. 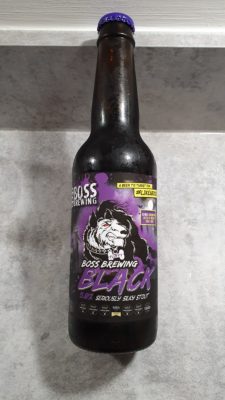 It has an almost comic-book style design, with the text appearing in brightly coloured boxes with contrasting text that make it a peculiar, but very interesting bottle.

You can experience this silky smooth award-winner for yourself by going to Beer52 where it’s just £2.69. Absolute bargain for a beer that’s got more awards than a country fayre.